Episode 64 : Fresh From Above

Episode 64 : Fresh From Above 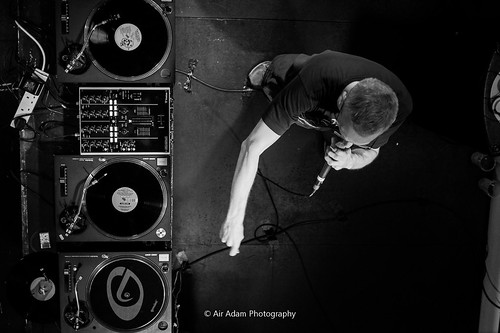 What a month - started a new day job, had a couple of photo assignments, plus needed to plan a mix including some Biggie (20 years since "Ready To Die" was released), 2Pac (18 years since he passed), and a few other tracks I've had on standby for a while. So far, all is good - let's get into the notes for the month...

A bit of a poetic start to the proceedings; great new UK track to kick things off, with the production getting a top-line upgrade with Tall Black Guy on the boards! I didn't know until researching the episode that Essa went to school at Eton, but it makes sense since he's also a practicing lawyer - it all shows in his lyrics. This particular version is a limited edition 7" release you can buy through Bandcamp, but for more of his quality rhymes grab the "The Misadventures Of A Middle Man" album - bargain price for it right now.

One of those random tunes I dug out trying to find an instrumental, only to find it's pretty notable in its own way! Mendoughza was down with the late great Guru of Gang Starr, and featured on a few things but this looks like it may have been his only 12" release. If you're only going to have the one, then having D.I.T.C's Buckwild produce it is a pretty huge result!

We're just leaving summer, so here's the last flush of the season. Soul cover version (and an upgrade, I feel) of the Seals and Crofts track, but you only get one verse before...

"Whatever happened to the summertime cookouts?" Gone. Gone like the preceding track, which provided the bulk of the samples for this incredible Darnell Scott beat. Whatever happened to him? I actually did a web search looking for more credits and it seems he only did this one perfect track. The first full song on Biggie's "Ready To Die" was instantly arresting, and it stopped me dead the first time I heard it roughly twenty years ago. Biggie's lyrics on how life got so much harsher for so many people as he grew up set the tone perfectly for a beautifully dark album - or was it darkly beautiful?

Cocaine 80s : To Tell You The Truth

No I.D.'s collective are a little on the mysterious side but do turn out some serious free releases. I got this one from the "The Pursuit EP," and it's got a nice bit of edge to it. James Fauntleroy is a killer on the lead vocals for the group, and they really, really need to get a full album out there!

It's been eighteen years? Feeling old again. Taken from the "Me Against The World" album, 2Pac gives his take on temptation (of course), commitment, and loneliness in his own style; nothing tongue-twisting, just very simply worded. The Easy Mo Bee beat is insane, blending Zapp's "Computer Love" (for the bassline), Redman's "Watch Yo Nuggets," and more besides. From the twilight of the period of 2Pac's career that interested me, before the Death Row era, this was a fantastic single. Funny video too :)

Quality dedication to the late reggae artist Nitty Gritty (for whose killing Super Cat was once charged) and other fallen dancehall stars by Wise Intelligent of Trenton, New Jersey's Poor Righteous Teachers. Nitty Gritty recorded the original for King Jammys sound in Jamaica, but Wise Intelligent takes the vocals for the hook and adds his own lyrics for the bulk of the tune. Ill Will Fulton does the business on the remix production, working around the famous "Stalag" riddim.

Another under-appreciated beat unearthed from the vinyl vaults! A-Plus of Souls Of Mischief on the boards for this one.

Brooklyn! A nice 90s piece recently put out for free by the official BCC Soundcloud page. The first version was on the 1997 "For The People" LP, and there's a more modern remix done by 9th Wonder, but apparently this was the original remix version. It keeps the Buckshot and Boogie Brown instrumental, but exchanges LaVoice for the late Aaliyah to give little extra to the hook. Works. Oh yeah, look out for Omar from "The Wire" in the original video ;)

Lowkey ft. Shadia Mansour : Too Much

More UK flavour, this time with an MC who is unafraid to take on political topics - whether it's militarism, Palestine, media, or whatever - and puts himself in the vein of the Immortal Techniques of this world. Absolutely love his breakdown of what money can and can't get you, and the laid-back Nutty P production and Shadia Mansour on the hook give it a smoothness that helps the medicine go down. Taken from the "Soundtrack To The Struggle" album, this wasn't a single but I think definitely could have been.

Two of my favourite MCs combine here, each with their own style but pure talent regardless. On this selection from Sean's second album "Jesus Price Supastar," check how the rhyme schemes on the two verses are actually the same, with just the actual words changing - very cleverly done. On the beat, 9th Wonder comes in - people often complain about his drums, but you have to appreciate what he brings here with that drum pattern - unusual, and very dope.

"Beef is guns and butter, no peace line / Sauteed, fried, with hate on the side..." I've had this one on deck for months, never quite being able to fit it in - finally got there this episode! Detroit's OSI and Ise Qold go in hard on the mic alongside hometown guest Guilty Simpson over a grimy Nick Speed beat. I got this free from Bandcamp, but it's also on their debut "Live From The Coney Island" album, which is well worth checking.

The man also known as 2Tall for his turntablist exploits is also a very accomplished producer, and he showcases a deft touch on this dark, dark track from his "Threads" album.

Just so we're clear, we're totally coming back to this album in the future! "Derelicts Of Dialect," the group's second album is an extremely underrated 90s release which I think everyone should have. The Brooklyn/Queens trio only had a two-album run before an acrimonious split, but both were quality. Right here you have (now label exec and reality TV host) MC Serch and (current baseball memorabilia dealer) Pete Nice ripping the mic on an SD50-produced track, with Daddy Rich jumping in with the cuts and Chubb Rock with a dope guest verse.

New flavour from one of my personal favourites, a preview for their forthcoming album which will be solely produced by Ski - the man responsible for the beats on "Uptown Saturday Night." As usual, an absolute slang torrent on this short and sweet track, and on the instrumental side, pay close attention to the ridiculously dextrous bass work; all kinds of runs and slides going on!

OutKast ft. Raekwon : Skew It On The Bar-B

I think I underrated this one when it came out, but that was partly because I just preferred "ATLiens" to "Aquemini," the album this was on. My bad! Raekwon, responsible for one of my top two albums of all time ("...Cuban Linx...") absolutely melts down his guest appearance - pay attention to how he keeps the same rhyme going through the entire verse. Insane. Organized Noise have the drums snapping, and OutKast themselves are quality on the mic as always, but that Rae verse though...

I kept meaning to ask Agent J if his website/podcast is named after this tune, then in the middle of a Google search found out it was! Ty has been one of the great talents of the UK scene for a long time and this is one of my favourite tracks from him, proper funk workout with just a hint of Latin flavour. I got this on the 12" with "Ha Ha" on the flip but it's also on the "Upwards" album. Great track to have in your collection either way.

Sorry for the needle skip - tried to clean it out but to no avail!

This song is at least in part being included because of that incredible title, which I remember using once in a high school game of "Hangman" (seriously). Before a field trip to a place called Cober Hill, I had a few quid in my pocket to buy just one new record to tape and take with me; the choice came down to Public Enemy's "Yo! Bum Rush The Show" and Professor Griff's second album "Kao's II Wiz *7* Dome," and Griff won it. Turned out to be a good thing since the PE album has remained available, whereas I've not seen a copy of this outside my own library in years. This track closes the album and is very much of its era - a long posse cut, pro-Black lyrics, and the most incredible amount of shout-outs ever. Even dedicated "shout out" tracks on other albums don't have as many as this one. The beat comes from The Soul Society, of which Griff is a member, and bears the Miami influence of the Skyywalker Records label that this was released under - listen out for the sub-bass drops!