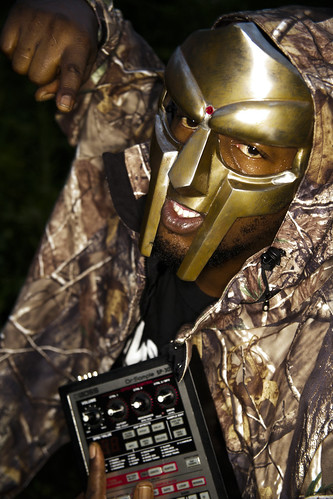 "Either unmarked or engraved - hey, who's to say?"

Wow, January has been a long year (!)

On the very last day of 2020, the Hip-Hop world was stunned to hear of the passing of Daniel Dumile, later known as Zev Love X, and eventually as the legendary MF DOOM. It had actually happened some time before but his family wanted to maintain some privacy, which is absolutely to be respected. In his memory, we play some tracks from the DOOM catalogue, plus some throwback favourites and a few recent releases. The bulk of the show is pretty uptempo, so one for the runners out there!

We start things off with the smoothness, the first full track on DOOM's debut LP "Operation : Doomsday" - which is still my favourite. A chunk of the album sounds like he just went right to the 80s soul crate and loaded the whole thing into the sampler, and this sets it off right. It certainly hits you differently now hearing him speak about his grave, and reuniting with his brother, the much missed DJ Subroc. This track gives you a window into some of the path DOOM walked on the way back to the industry after a traumatic set of personal circumstances, and is packed with references if you understand what you're hearing.

Quality production from "The Robert Glasper Beat Tape", doing great work with a piano sample and really changing the vibe. Check how he reinforces it with that fuzzy bass that plays along with parts of the main riff.

A celebration of Hip-Hop here, with Ozay Moore and Ohmega Watts taking the mic atop the production skills of Tall Black Guy that is still getting regular headphone time from me three months after release. The sample at the start is discussing the late Latin jazz percussionist "Hard Hands" Ray Barretto, and is taken from the essential Hip-Hop documentary "Style Wars". Essential.

Taking it back to the early days of 9th Wonder and the Justus League crew, we have a track from the "WJLR Radio, Volume 2" mixtape, which you'll be lucky to find these days. EAF is a very skilled MC and, very characteristically of the time this was recorded, the topic here is the state of Hip-Hop and respect for artistry.

Bringing it back to a recent release, the new "Extinction Level Event 2 : The Wrath Of God"  from the tail end of 2020 - unlike the first "ELE" release in 1998, the title seems to fit the age this time around... Anyway, this is a highlight, with the classic pairing of Busta and Q-Tip over a great Focus beat. The bar layout is a bit unusual, so it made the mixes on either side a little weird, but worth it to share this track.

Dallas stand up! Texas producer Doc Ish brings in a trailerload of vocal talent to grace this beat, one that bumps along and still envelops you. I can't find any info on Angelica C, who does the business on the hook and outro, but she comes correct, and while all the MCs put in solid verses, Sean P is - as almost always - the star. Get this one on the 2010 "The First Treatment" album.

Grap Luva : Rocking With Elegance (One For Damu)

Hitting the SP-1200 here with a nice beat from Mount Vernon's Grap Luva from the "Neva Done" release. Drums and piano on a nice head-nod vibe with some little accents to make the beat complete - it's a great demonstration of not overdoing things when you have a groove that works!

Not the whole track, so roughly three minutes and fourteen seconds of this specific funk. I wasn't able to get any Whodini onto the last episode, so it's this month that we pay tribute to the late John "Ecstasy" Fletcher. This track is taken from their sophomore album "Escape", and Ecstasy and Jalil kick their vintage-styled rhymes over the familiar instrumental courtesy of Larry Smith. You may recognise the beat as the theme for Ralph McDaniels' "Video Music Box", or any number of break/turntablist tapes! RIP Ecstasy.

When I realised I could work this transition, it had to be done! This was the first KMD track I ever heard, and possibly the first Brand Nubian as well, after it was played on Pete Tong's Rap Selection show on Radio 1 back in the day. The lead MC of KMD was Daniel Dumile, then going by Zev Love X, and later becoming MF DOOM. All the MCs are dropping references from their respective religious organisations on this one, and this self-produced track from the debut KMD album "Mr Hood" is an absolute winner thirty years after its release!

This is one of my favourite cuts from the excellent 1992 "Don't Sweat The Technique" album, the final release from Eric B & Rakim as a duo. As per usual, it's a microphone clinic from Rakim, with the density of the lyrics smoothed out by his vocal control and easily keeping up with the break-driven production.

Never mind all the swing on the soundtrack for "New Jack City", this was the highlight, which also stood up strongly next to anything else on Ice-T's crowning "OG : Original Gangster" LP, on which this also appears. An encapsulation of the speed, violence, and chaos of the streets as they were then, and as always with Ice, an acknowledgement that it all comes to a sticky end. The hectic production from Ice and legendary LA turntablist DJ Aladdin creates the perfect dense high-octane menace to go along with the iconic lyrics.

At the tail end of last year we got an instrumental release of the "One Of The Best Yet", which itself was the surprise release of 2019. I didn't realise how much I missed the combination of Guru and Preemo, but the beats even stand as good listens by themselves!

A gem here from mid-nineties Manchester, and the brainchild of scene veteran Dave the Ruf, who you might know from JBC, Mindbomb, or if you're local, the Scratch Jam sessions he and DJ Rasp put together! This is uptempo, sample-packed, and topped with very serious cuts, which made it a worth inclusion on Bomb Records' original "Return Of The DJ" album.

Staying with the 90s vibe, we wind it back to 1991 and the second album ("Let The Horns Blow") from Donald D out of the Rhyme Syndicate crew. No frills, just skills, with the Syndicate Sniper busting off lyrical shots over Bilal Bashir's heavy drums and sampling of a well-known bassline.

Motion Man : Come On Y'all

This track from "Clearing The Field" is an excellent tribute to/take on "My Part Of Town" by Philadelphia's Tuff Crew. KutMasta Kurt on production creates a 2002 version of the beat for Motion to get busy on. Definitely check the video - it's definitely one of the more original ones I've ever seen!

Teacher, MC, and now published author Mega Ran is definitely a man to check in at least one of his chosen disciplines! While he may be in Phoenix now, he's a Philadelphia native who combines here with his hometown compadre Storyville - both of them were former members of the RAHM Nation crew. The "Soul Veggies" album from 2015 is just solid, nourishing quality (part of the reason for the title), and so I thought we'd come back to it - I last dropped a track from this four years ago! Uptempo double bass action drives this one, the mic work is on point as always, and the cuts in the hook season it up lovely.

There have been many versions of this track, but this is the original from the Brooklyn don Spinna! You can find this one on 12" with "Watch Dees" (not the DJ!) on the flip.

The last full track on "Operation : Doomsday" is the last track for this month's show as well, and it's one of my personal favourites from the album. It's just flavour, pure MC talent and writing skills, no hook, and a beat that isn't weird, but is somehow pretty unique. I could maybe have heard Ghostface doing something with a track like this, but DOOM stamps this one indelibly.