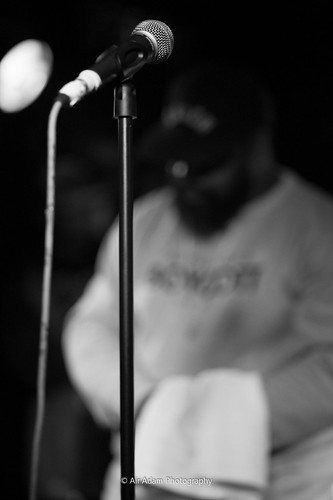 Hip-Hop took a terrible blow this month with the great Sean Price returning to the essence at just 43 years of age. From his early work with Heltah Skeltah to his more recent solo career, he was a consistently excellent MC who blended incredible skill and ferocity with wit and humour - and he was still improving right to the end. His material has been played many times before on this show, but this month we're going to have several of his cuts in the mix, along with some other classics and new gems. I hope it's a worthy tribute. P!

One of the earliest tracks from this pairing. Agallah hooks up a great beat based on Dexter Wansel's "What The World Is Coming To", and just check what he's done with adding the extra bassline - it's quality work. This was part of Sean's demo to get a solo deal, which he and Agallah worked on regularly at Game Records. When Rock Star came calling looking for some music for "Grand Theft Auto III", Game included this track in their submission and it made the cut! I'd been thinking about opening an episode with this tune for a long while but this month, with Sean's son on the intro, it couldn't have been a more perfect time.

Dipping back into the 2012 "StOoDiOtYmE" EP (I won't front, I had to copy and paste that title) for this one, Bumpy and DJ Premier combine once again for the solidness. The EP was a warm up for the "Kolexxxion" LP - and at only £2.49 on iTunes, why not grab a copy if you don't already have it?

No hook, just rhymes and more rhymes! These two veterans go back to back, swapping eight-bar sections - hence the title. Toronto's Frank Dukes gives them enough space in the track so that you catch every word, and they don't disappoint. I picked up the "Arts & Entertainment" album that this comes from after a Masta Ace show - it's a 2009 release with a good selection of producers and features, worth checking out.

Taking it back to the start of Sean's career as Ruck, this was a low-key banger from Heltah Skeltah's "Nocturnal" album. It's also a record about which people who don't (or don't want to) know better would say "oh, they just took that Portishead song and then rapped over it" - not grasping that both groups based their tracks around a common sample, Lalo Schifrin's "Danube Incident" to be precise. Mr Walt of Da Beatminerz hooks it up lovely, with some smacking boom-bap drums and filtering of the main sample weaving in and out during the verses. It's stuff like this that had me ignoring "Reasonable Doubt" when it came out ;) On the vocals, while Rock had the voice that was instantly distinctive, on the low it was Ruck who had the better bars - not that there's any slight there, you're talking about an all-time great!

From the first Portishead album "Dummy", this shows you that they were a group that came out the gate with their skills already at a very high level. With lighter drums (fittingly so) than the preceding track, this is great production and with Beth Gibbons' haunting vocals and lyrics floating over the top...classic. The rare piece of genuine excellence to reach the upper reaches of the pop charts, this deserved every bit of acclaim it got.

Not even sure how I found this - maybe a tweet/post from FWMJ's "Rappers I Know". The Foundation are a large crew out of Houston, and this project ("Laura Mvula Chopped") is helmed by two members; Kay on sampling/sequencing/drum programming and Luke on keyboards/synths. They take as source material a performance by British West Indian vocalist Laura Mvula (who I need to start studying) and Metropole Orkest, and turn their hands to re-interpreting it. The result, as you can imagine from this one track, is a beautiful listen - and on top of that, an absolutely free download!

J-Zone : Time For A Crime Wave

While I'll always be a vinyl fan, the modern practice of digital releases makes it a lot easier to release singles out to a wide audience, and also makes them very affordable! J-Zone has made very effective use of this channel on his return to the music industry, and as a fan I'm glad of it. This particular track and its remix are available on Bandcamp and it's typically excellent; Zone sounds like he's totally wilding out but if you listen properly he's actually making very cogent points! Backed with his distinctive production style, this is dope as hell.

Huge stomping track from "Monkey Barz", Sean's debut solo album - when this first dropped, it was getting a lot of play from guys like me and DJ Mathmatics, who was the one to put me up on it. Toronto's Tone Mason production crew come with something noisy, gritty, and booming which destroys everything in its path and forms a great backing for Sean to get busy. Definitely pick up this 12", with the nice little B-side "60 Bar Dash" sealing the deal.

Side note: for the longest I assumed this track's title was drawn from Buju Banton's "Boom Bye Bye", but someone suggested recently that it's a corruption of "Ali boma ye" - never thought of that!

Another track that Mathmatics put me up on - and one I probably never would have encountered on my usual record shopping! LMNO ("Leave My Name Out") is an MC from Long Beach, California, but connected to the skate/surf scene - a different side of things from someone like Snoop or Warren G. He wouldn't categorise himself as a "Christian rapper" but that content is definitely there on this track from the "Economic Food Chain Music" LP (and the B-side to "Hit"). Production comes from Oh No, and it's just...a weapon of bass destruction. The kind of crowd who liked D&B, grime, and dubstep loved this record.

I don't know who Amp is, but he basically did a very DJ Premier beat on this one! From Sean Price's final studio album "Mic Tyson", he kicks some of his trademark witty thugged-out rhymes, at one point winking to the listener "I'm lying, just like the rest of these dumb-ass rappers" :)

This popped into my head as a similar sounding beat to "Pyrex" - not identical, but reminiscent with the hard piano and drums. The full version of the track is on Jay's "Vol. 3 : Life & Times Of S.Carter".

Was looking for one Sean P's many, many collaborations to feature here and ended up choosing this one partly for this episode's epigram, but of course it's just dope overall. From El's "The Unusual" album, the MC split the first verse and then solo the second and third, which is an unusual layout - I kept expecting the other to jump in. El is solid as always, and Sean P's bars are brutal but also clever for those who get all the references - very much his style! Production is provided by 3rd Rell; all the guitar stuff going on is kind of discordant - it's not my favourite, but it does the job.

Talk about a major, major come up - and on the other side of the ledger, a meeting of the minds. The original production was done by DJ Premier with the young Russian producer BMB (aka Spacekid), and when MF Doom had to bow out of recording due to illness, Anderson.Paak stepped in. This was just after Freddie Gray was killed in Baltimore, and the rightful anger is all over the verse. When Dre heard the track, he wanted it on his own album, and added an extra verse - he may not have written it (Anderson and King Mez did), but he does an excellent job delivering it. This isn't even my favourite track on the new "Compton" album, but it did fit well here. Oh yes - that sample of DeRay McKesson speaking on Baltimore isn't part of the track, but I thought that would fit well too.

The "Dettwork SouthEast" album was originally scheduled for release in 1996, but record company machinations meant that it was shelved and from that point it took on a legendary, mythical status for all those who had never heard it. Tony Rotton went on to record many other albums, even using some of the rhymes from the unreleased project, and yet the desire of the fans to hear that initial record never waned. Finally, it got a release in 2014 - meaning there were adults around on the release date who hadn't been born when it was first recorded! I jumped on a vinyl copy on a trip to London and am glad I did; it reminds me of the particular era in British Hip-Hop production that turned me on to more of our domestic product. This track is centred around the low end, but the little guitar licks and flute sample combined with the cuts add crucial extra flavour. When you consider that Rotton did all the rhyming as well as the production (alongside DJ Rumple), you have to take your hat off - and remember, this is eighteen years old!

Canada stand up! I came across First Division in the last couple of weeks after seeing a link to their video for "This Iz Tha Time". I went to iTunes to buy it and found that the album it was on was up for pre-order, with only two tracks currently available - that one, and this. Even though this isn't the tune getting the big push, it's one they can be proud of! BeatWyze is on the boards mixing up Eastern-sounding pipes and strings with quintessential boom-bap and bass sounds while the MCs Expertise and Shylow (also on the cuts) speak on their dedication to the artform. Let me just go back to the cuts for a second - some serious work was clearly done to find all the phrases that go into the scratched hook; some rhyme, and some just fit together to form a coherent whole. As someone who once put together a sixteen-bar verse from samples, I respect that effort!

This month's random Bandcamp find isn't a million miles from home, with this smooth number being part of UK producer Vanilla's "Sweet Talk" project, available as a "name your price" release! S/he's also on Soundcloud, so be sure to have a listen.

"When god made me, he broke the mould, set that shit on fire, flushed it down the commode" - pretty much. I found this freestyle very recently and it turned out to be a perfect way to end the show, with Sean spitting his trademark disrespectful bars straight over...Keni Burke's "Risin' To The Top", thus bringing the episode full circle.

Please remember to support the artists you like! The purpose of putting the podcast out and providing the full tracklist is to try and give some light, so do use the songs on each episode as a starting point to search out more material. If you have Spotify in your country it's a great way to explore, but otherwise there's always YouTube and the like. Seeing your favourite artists live is the best way to put money in their pockets, and buy the vinyl/CDs/downloads of the stuff you like the most!