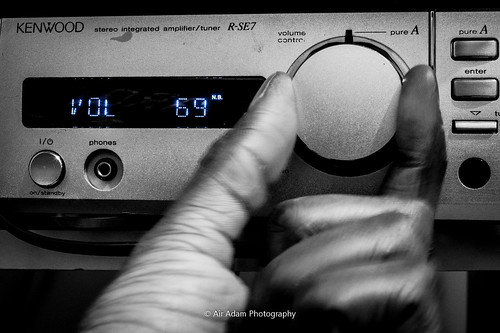 My goodness, getting this one out on time was tough! I think it's a good one though, and I do like the shot I put together for the cover art too :) As always in February, we celebrate the lives of J Dilla, Big Pun, and Big L - all make an appearance on the episode, alongside some other greats. Enjoy!

Oh yes - one excellent thing I heard this month was an interview with Joe Schloss, absolutely exceptional scholarly discussion on the Hip-Hop culture, origins, and ethics. A must-listen!

This popped into my head recently, and with that intro it was a good candidate to lead off the episode! Despite the words of KRS-ONE, this track from Xzibit's "Restless" LP was actually produced by X and Thayod, with Dr.Dre taking Executive Producer credit as with the rest of the album. As far as I know, Kenny Parker himself isn't on this track but this is basically a retouched cover of the original track from the Boogie Down Productions "Edutainment" album; Hip-Hop doesn't do covers often, but this one clearly has the blessing of the original artist. Respectful.

For some reason, I was sure I'd already played this one for you but it must have been on a mixtape somewhere, away from the podcast. Straight out of Munich, Sepalot has very much shown he can work that jerky-rhythmed electronic angle to good effect (I recommend "She Likes Me" with Frank Nitty of Frank N Dank), and this one jumps and tics along nicely. Find it on the "Beat Dimensions Vol.1" compilation.

First Dilla track of the month! A man whose beats covered many styles and moods, this came from the phase where he basically worked out what all the "for the club" producers were doing and then did it better, even if he didn't get the big sales. I've always been a bit of a fan of this 12", despite (or maybe because) it not fitting into what most people think of as the Dilla sound. His compadres Frank N Dank take joint charge of the verses and keep it simple. Good one for the gym!

Heard a snippet of this on the "The Black Guy Who Tips" podcast (excellent, by the way), and rushed to scribble the artist name down - I'd never heard of her, and thought this track was a killer! Apparently this got a Grammy nomination (Best Traditional R&B Performance), and it was well deserving. Antonique will be known to some of you as an actress, having played Mimi in the Broadway show "Rent" and Faith Evans in the Biggie biopic "Notorious," but she is *not* playing with her debut single! She lets it all hang out on the vocals, and the production has to be top-notch to keep up - luckily, Darryl "Darulah" Farmer gets busy with the heavy drums and the choppy, stuttering organ line just to name the two foremost elements. Great way to open a career!

Heavy. One of the many great cuts from Diamond's debut "Stunts, Blunts, & Hip-Hop" (as summarised on Episode 12), and the final choice to follow up the Antonique Smith track after a long period of digging for tracks with organ sounds and heavy drums! Great bit of storytelling, based on the chaos of the 80s, with a protagonist who keeps getting himself into terrible situations which he's then forced to run away from. Trivia note: to hear him tell it, the voice of the would-be robber in the cinema in the first verse is that of a pre-fame Fat Joe!

Went to Pun's posthumously-released second album for this one, which has some of that commercial appeal alongside some of those seriously hardcore lines for the undergound! Sean C brings the Latin flavour to the production, and Terror Squad's Tony Sunshine the spice on the hook. Pun reps Puerto Rico 100% on this one, hence the name...

A spot-on fit I think - with the "Puerto Rico" sample already inserted into the background of the outro of the preceding track, the speeds being similar, and this being an instrumental...it'd have been a waste to use it any other time. Working a vocal sample from DJ Grand Wizzard Theodore's "Live Convention '82" tape, Frankie Cutlass shouts out his homeland atop some classic drum and bassline samples. This is one of the few well-known classic Hip-Hop singles that doesn't have a rapper on it at all, but will always get a reaction and people joining in when you play it in a club!

This incredible beat was first heard on one of Dilla's famous (on the underground) beat tapes, and I always loved it, so was glad to see it get picked up for a better airing. It's so dark, you could only really match that vibe with the lyrics, and Detroit's Tone Plummer and Mr Wrong do just that, speaking on the severe effects of the economic downturn on their city. Well put-together piece from the J Dilla "Rebirth Of Detroit" album, which is worth checking out - it turns up a few choice gems.

As I say on the voiceover, I thought that in terms of theme, this worked well as a follow-up to "Rebirth Is Necessary," especially with the closing news sample. Picked this 12" up in London recently and Bumpy embraces the wise elder role and offers jewels on life to the young. Great B-side to the Nas-featured "Turn Up The Mic," with DJ Premier's production providing the perfect reflective backing.

Had forgotten all about this but it popped into my head at just the right time! Oh No's "Exodus Into Unheard Rhythms" LP was a journey into the catalogue of the Canadian composer Galt MacDermot, who has supplied the world of Hip-Hop with many a dope sample. Sampling strictly from one artist can be a challenge (well, unless you're going James Brown or something), but Oh No makes it work and the album features a host of MCs who make it a solid package. I'm a big fan of Posdnuos' lyrics here, talking about the industry while reminding all the wannabe hard rocks to smile once in a while :)

Skinnyman : When I Give My Heart To You (Joe Budha Remix)

DJ Mentat did a sterling job on the original version of this track, but Nottingham's Joe Budha takes it in completely different direction that for me fits the subject even better. Luckily, there's a 12" with both mixes on which is well worth having, especially with the bonus of Mystro's "Waiting" on there too - there's a track very likely to make a future episode!

All it's going to take is a small research grant to prove that it's scientifically impossible to dislike this beat. SP-1200 all the way as Pete Rock works his magic on a sample from the legendary Roy Ayers' and his vibraphone. If you don't have the Pete & CL album "The Main Ingredient," definitely fix that - it's a staple.

The Stretch & Bobbito radio show on WKCR (1990-1998) was an absolute landmark in Hip-Hop radio, helping to break more important acts than you could shake a very large stick at, and one of the many was Big L! In 1992, before most of us knew him, a then-18-year-old L went up to the studios and laid down these vicious bars over a classic breakbeat. Someone gave me a digital copy of this, and I thought this was a perfect month to share it. Just check the raw talent, and some of the rhyme influences of the period coming through in his flow.

Keith Murray : It's That Hit

I have this on a 12", and yet only had a clean version on the Erick Sermon "Insomnia" compilation! Staying with the "Impeach The President" drums that came in on the last track, Erick blends up multiple funk sources on the instrumental and lets the man from Carlton Avenue do what he does on the mic.

Newark, NJ in the house on this one, connecting with Brooklyn as the man DJ Spinna lends his hands and ears to remix duties. The classic boom-bap original of this track came from their second album "That's Them," but this bubbling version is a bit harder to find; look for the "DJ Spinna Remixes" white label, and you should be in business.

This Manchester crew are continuing to make big moves, and ahead of the release of their second album, they collaborated with North Carolina born, Paris-resident MC Mattic for the "Born Lupers EP," a quality little set available for a very reasonable price. This particular tune is early on the EP but also an early favourite for me, and check how the beat changes halfway through, with a noticeable speed increase to boot, making it an interesting one to mix in and out of. Would have liked a longer instrumental intro and outro though ;)

If I drank, this would be the kind of track to sip a glass of wine to. Don't let me stop you though :) Released before Dilla entered most people's consciousness, he cooks up a track that probably couldn't be further away from the Rashad Smith-produced original!

Very classy tribute. Houston jazz virtuoso Robert Glasper turns his hand(s) to a medley of his own renditions of classic Dilla beats, running over nine minutes in total. My favourite piece has to be his take on the beat for Busta Rhymes' "Show Me What You Got" starting @ 54:29 - worth the money for that bit alone. "Black Radio Recovered : The Remix EP" is available for under £4 currently and is absolutely a recommended purchase for all lovers of quality music.