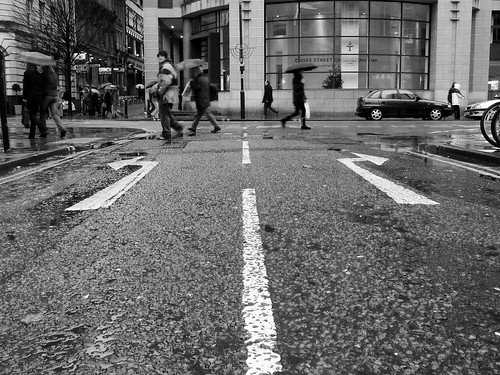 The end of another year, and an eventful one in so many ways. Some of that influences this month's selection; overall I've just looked to put together a set of tunes to give your speaker boxes that extra bump to see out 2014 in style!

Dark, dark, dark! The intro sample from the film "Short Eyes" sets the tone and it just stays tough from there. Guest-starring on a Wu track seems to bring the best out of Nas (think "Verbal Intercourse"), and his verse here is a gutter classic which manages to steal the show from both Raekwon and Inspectah Deck. The beat is a masterclass on how to use percussion and drums other than the kick/snare to give the atmosphere, and the main sample for the track is worked to perfection. Easily the standout on "The W."

Manchester's Pro P putting in yet more work on the MPC, and last month he released his "Concrete Jungle" beat tape on Bandcamp. It's well worth a listen, and this beat was one that grabbed me from the first run-through.

An overlooked "airing out the police" gem, surprising since the "Wrath Of The Math" album is a pretty well known one for the core heads. DJ Premier is on production and weaves several samples together expertly for the backing, and then kills it with his simple(ish) and highly effective scratching with the word "invasion" from Nas' "It Ain't Hard To Tell."

I just thought this was a great opportunity to slot this track in, with the hook cutting up vocal samples from the preceding Jeru record - no better place for it. This was originally on the 1998 compilation "New York State Of Rhyme" which I never got round to buying, but thankfully this track at least is available for digital purchase. P.Original on the quirky beat, but for me the production highlight is those cuts.

Picked this one up as a free download from Rodney P's Soundcloud page, and was pleased to come across it! I think this is even better than the Joe Buhdha-produced original, which was the A2 track on the 2001 "Big Tings We Inna" 12". I'd not heard of Muneshine before but s/he sounds like a producer to check for, and I think you can find some more work here.

A mini autobiography and career summary from J-Live, patterned after Lessons 1-31 of the Nation of Gods and Earths' Supreme Wisdom Lessons (hence the title). An excellent choice to open his "Then What Happened?" album, setting the stage for all the tracks to come. I would have sworn this was a DJ Spinna track had I not read the credits, but it's DJ Jazzy Jeff with some serious bounce in the bass, great layered horns, and judicious scratching.

You can never go wrong with a Spinna beat. Grabbed this one from the "Compositions 2" vinyl, and I'm thinking I need to find the others in the series...

What a combination; the Stalag riddim driving the track, with the hook reusing the melody from the hymn "Gloria In Excelsis" with decidedly un-Christmassy intent! This was a 1996 7" single on VP Records, perfect for clash purposes. On the vocals, the two deejays work together well as they have on several other records, with their contrasting tones filling the spectrum. Fire! *airhorn*

Keeping the dancehall spirit going with the quality Exile production on this track, slicing and dicing Sister Nancy's "Bam Bam," giving it a speed boost and adding some slightly off-beat snare to keep you off-balance! Emanon ("No name" backwards) is the combination of Exile on the beats and Aloe Blacc on the mic, and this cut from "The Waiting Room" LP always gets a big reception when I include it in a set. Lyrically - absolutely nuts. Listen carefully and check how Aloe counts from 1 to 30 as the track progresses - sometimes using the number explicitly, sometimes by reference. Great work.

Like I said, Spinna beat = automatic good move. These two have combined to good effect many times in the past (notably as half of Polyrhythm Addicts), and Shabaam shows he's still up for the challenge of riding an unusual backing; Spinna goes space age on this one! This is available as a digital download or as the B-Side of the "Motion Picture" single.

Taking it back with a track that was a big single when it was released - I certainly remember it from my first year at university! A lot of people are into the remix, but there was never anything wrong with this original version :) Great party track from the "Legal Drug Money" album. RIP Freaky Tah.

Tough beat, even if you're not into the synth sound much you can't deny it. Seems like an age ago when something this heavy could be a relatively mainstream track/club banger, but there we go. Check that drum pattern and see if it has an air of familiarity; it's the same layout as "It's All About The Benjamins," which was a heavy club tune in its own right.

That line I cut up jumped into my head when the Eric Garner grand jury ruling came out and I just knew I was going to include this track from "Illadelph Halflife" on the next episode. Very short, but Black Thought crams the whole story into a compact package with skill.

Best MC name. Ok, second to Edgar Allan Floe. Obscure piece here, the B-side of the 2001 Raw-N-Tellect single "The Game" - I didn't know anything about any of the personnel on this record but gave it a go! Turns out the B-side takes it, with the MCs doing a good job over Jahson's string and piano-laden beat. If you like this, I've seen copies on Discogs going cheaply!

One of those 12"s with tracks that never showed up on an album but were serious flames all the same! The super-basic hook somehow totally works for me, and contrasts with the standard slang-heavy Lo style on the verses. Production is courtesy of Tribeca, who once again hammers the drum machine like it owes him money, with sound exploding all over the place. If you're a DJ, you'd do well to have this single in your crates.

Brownsville's foremost representatives killed their performance of this at their recent show in Manchester, and as it was an early favourite of mine on the new "Street Certified" EP, it makes the cut. Los Angeles' Jazi Moto is on production, and the highlight has to be the drumming - not sure if it's live or programmed but she kills it! A little more low end would have been a bonus in my opinion but then it might have made it sound less natural. Big tune anyway :)

I wanted to follow the M.O.P. track with something where the drums were pretty active, and then remembered that on his return to releasing music, J-Zone had learned to play the drums and was incorporating a lot of live work into his tracks. This is the no-vocal version of one of the tracks from his latest album "The Peter Pan Syndrome," which is an album I'd recommend, just like the rest of Zone's output - he just doesn't sound like anyone else!

Dirty Diggers : Let The Pound Get A Round

Yorkshireman Young Max and Londoner Pat Stash put a perfect UK spin on the J Dilla beat that sampled Billy Paul's "Let The Dollar Circulate" and was the underpinning for Steve Spacek's "Dollar." Hopefully the worldwide listeners can appreciate this one as much as my domestic audience will :) Got this on one of those mysterious unofficial vinyls with a few other blends/remixes, so it may not have got an official release - snatch it up if you find it!